The first business buildings were sided with "rustic," lined with burlap, and roofed with paper. The Latah County State Bank opened its doors September 14, 1908, and its officers were J.A. Harsh, H.D. Warren, A.W. Laird, McGowan, Henry, and Ole Bohman. Bohman was also an officer of the Troy bank, respected and well-liked. Harsh had never been to Idaho and was, in fact, still in Michigan. The newspaper, the Deary Enterprise, started publication on September 19, 1908. Its owner was Carl Peterson, who had formerly published a newspaper at Peck, Idaho. He immediately began extolling the virtues of Deary and the Upper Potlatch country.

Deary, Idaho is the product of the Potlatch Lumber Company, just like Elk River, Bovill, and Potlatch. But unlike other company towns along the Washington, Idaho, and Montana Railway Company, Deary was carved out of the timber by homesteaders and farmers. The town lies at the head of the Big Bear and Texas Ridges at the edge of the great white 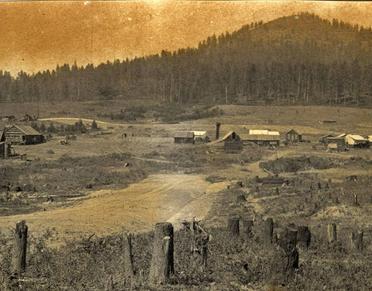 Joe Wells, a black who emigrated from North Carolina in 1889, was a legendary lumberman in the region. He earned his reputation of hard work and hospitality with the help of his wife, Lou. They operated a lodging house and Joe experimented raising Angora goats, dug the third well in Deary, held a contract in 1910 to log three million feet of timber, and took the prize at the Upper Potlatch Fair for his stallion.

Seasonal jobs were vital for every family around Deary. When the men had to work in the timber or go to the harvest for cash, the women stayed at home and ran the farm. the strength required to be a mother, farmer, and homemaker in isolated rural life fostered strong-willed, independent women. In a society where divorce was not an alternative, domestic incompatibility might be resolved with buckshot delivered by the wife as well as the husband.

In 1905, the engineers for the Potlatch Lumber Company surveyed the right-of-way for the railroad to the Bovill area. When the settlers around Avon insisted on too high of a price for their land, William Deary, Potlatch General Manager, decided to locate his station at the present site of Deary. Most of the future townsite consisted of the Blailock homestead. Blailock had cleared five or six acres, but decided to sell out and moved to Joel. Deary bought the Bert Crooks place too, where the present school is located. Finally, Deary go the Roundtree place, on the east side, in trade for a team of horses. By 1906, Andrew Carlson had a wayhouse in operation at the townsite, catering especially to the track construction crews, and later expanded into the Carlson Hotel. The promise in the embryonic town was welcomed by all: jobs, money, and trade would surely improve life in the upper Potlatch country. 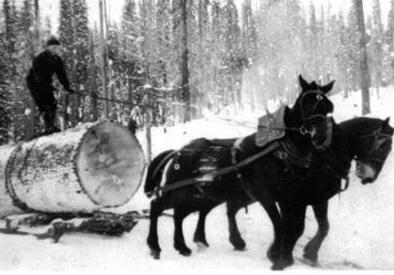 Over the years, Deary has seen a revolving downtown. they used to have a Ford Dealership. Deary also used to have a signal light, but that too is long gone. The City now has a grocery store, NAPA store, saw shop/hardware store, library, ATV and motorcycle repair shop, convenience store/service station,  auto repair/tire store/service station, a community store, multiple churches, one restaurant, and an artisan bakery and creamery. There is no bank in Deary.

Over the years, Deary also saw the acquisition and maintenance of the Nelson Activity Field, Serenity Park, and the relocation of the football field. As a member of Tree City USA, the City of Deary continues to encourage the development of park-like settings

Of course, over time the rail-line ceased to operate and in 2015 some of the grain elevators were dismantled. In or around 2006, Deary saw the installation of a cell tower by AT&T. Inland Cellular built its tower in 2015, which went online in early 2016.

In 2007 the joint City Hall and Parks and Recreation building was constructed. A reader board was added to City Hall in 2014. In 2008-2009, a new Fire Department building was build across from City hall.

Deary has a lot of history and still has its original Post Office building and an original home still stands on Main Street. 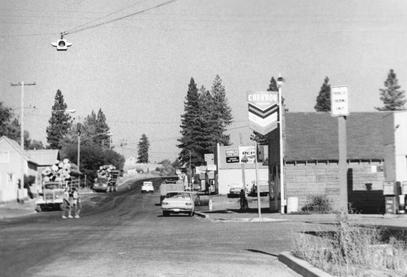 Many businesses came and went in the early boom period. Lumbering brought jobs and money, but it did have seasonality and, unless merchants could weather the snow and slowdown of winter, they would find themselves having extended too much credit and holding too much inventory. The Potlatch Company logged year round in some places and gave job contracts to locals for the summer. Around Deary, C.W. Asplund, the Greenwood Brothers, Swan Erickson, Joe Wells, and G.R. Lawrence regularly received these contracts. They in turn hired six to twelve men for their crews, which cut timber along spur-lines (short track routes up timbered drainages). Lawrence often logged his own land, and since there were several sawmills around Deary and persistent demand for lumber, he was one of the few independents. 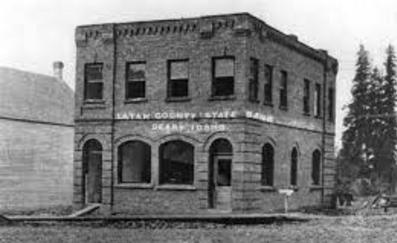 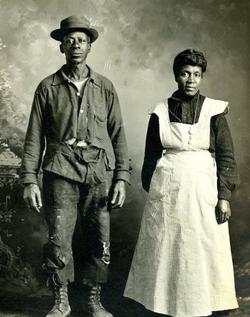 pine forest. It was to these areas that homesteaders

came in the 1880's and '90's. They were mostly Scandinavians who had tried the upper Midwest first. To these people, a good farm had timber on it, and by the late nineteenth century in the Midwest, land parcels were small and forests were dwindling.

The Homestead Act gave 160 acres to anyone who could clear forty acres, build upon it, and live there for five years. This was called "proving up". In the white pine forest, that was a tall order. Determined settlers did make the land productive, and gradually the area filled up. If one person couldn't make a go of it, there was someone else who could "jump the place," adding acreage to his own.

Though the live was difficult, homesteaders socialized together, built schools and churches, gathered for barn raisings, and help dances with midnight lunches in some of the old cabins. Visits to Troy and Kendrick were opportunities to sell lumber and farm produce for cash and to buy luxuries as well as necessities.

The shortage of currency, especially after the depression years of 1893 and 1896, was probably the greatest obstacle to real growth in the community. Prices for land or groceries were low because there just wasn't any money around. Trading was an especially important activity.

The town of Deary was born on September 24, 1907. that was the first sale day of town lots by the Deary Townsite Company, managed by F.C. McGowan and H.P. Henry. unlike the town of Potlatch, where every interest and life itself was run by the lumber company, the announced policy of Potlatch Lumber Company was to log around Deary and then sell the cleared lands. McGowan and Henry were former employees of Potlatch who had been educated in the East, risen through the company  ranks, and installed as managers for the Townsite Company to oversee Potlatch interests. Two homes, which still stand, were built for their occupation by Potlatch.

Residence lots were not expensive. Later, some were donated to the University of Idaho and some were given away in community fundraising lotteries. In the first year, Deary grew quickly. Several mercantile stores opened to satisfy the real needs of the established community.

He publicized every developmental scheme and quoted the "boosters," who were actively working to bring business to the Deary area. Periodically he would remind subscribers of his favorite developmental hopes such as the dairying industry, strawberry growing, and a cold storage plant. The newspaper tried mightily to exact the proper respect for everything about Deary and never referred to Spud Hill except as Mt. Deary.

In those early days, Deary was publicized all over the West and as far east as Minnesota. This was largely the result of the Deary Commercial Club, which was the impetus behind the organization of North Idaho civic clubs. McGowan, as a club member, was in charge of the Latah County exhibit at the Minneapolis Land Products Exposition of 1912, where most visitors thought that all land in Idaho needed irrigation. Though few today have any personal recollection of McGowan, his own interests and those of Deary intertwined for several years. He was elected to state legislature in 1914.

Deary continued to grow as Potlatch Lumber Company expanded its operations. the Deary Lumber Company was established in 1909 to independently mill lumber, the Deary Clay Products Company turned out bricks first used in building the First State Bank at Bovill, and the Farmer's Union built warehouses to make Deary a grain shipping point. Through it all, Antone Lee, who opened his studio July 16, 1909, photographed people, places, and events for postcards and portraits, thus making a valuable historical record of the region.

In October of 1923, a major fire destroyed all of the buildings except the bank on the west side of Main Street. Afterwards, with the dwindling activity of the Potlatch Company and the paving of roads to Moscow, Deary settled into its present role as an outlying agricultural community. In the 1940's and '50's there was a mica mining and processing mill in Deary, which provided employment to many Deary residents. The highway from Deary to Bovill was built in 1957.

In the 1960's, Deary schools consolidated with Bovill and Troy. Elk River joined the school district in the '80's. Deary and Troy deconsolidated effective in July 2000. Deary remains part of the Whitepine School District. The school was remodeled and expanded in 2004, including the addition of a new gym.

In 1964, new wells were drilled for the city water supply. Sewer systems were installed in the 1960s. The City's water supply was expanded in 1996 with water from Spud Hill.

throughout the City. Potlatch acreage was also annexed into the City, and Potlatch moved its office to Deary from Bovill.